Are Zinc Nappy Creams Really a Problem for Cloth Nappies? 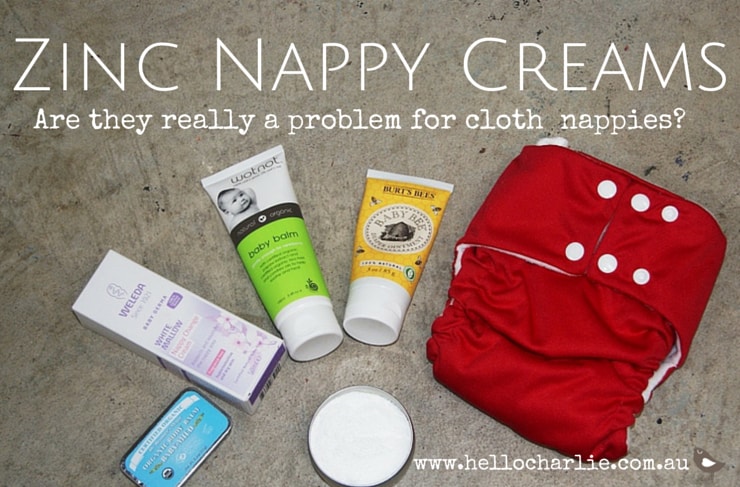 If you’re a cloth nappy user, you may have read that you can’t use zinc based nappy creams with cloth nappies. The story is that it causes a build up on the fabric of the nappy and the nappy becomes less absorbent.  Is it  true? Why is this the case? What can you do instead?

Is zinc a problem for cloth nappies?

It’s not the zinc that builds up on the nappies, it’s the oil. The oil becomes trapped in the fabric of the nappies, so that you get less absorbency.

If this happens, you’ll need to do a strip wash of your cloth nappies so that you can get back to maximum absorbency.

So if you’re using an oil based nappy rash cream, regardless of whether it’s a natural zinc nappy cream, or it contains petrochemicals, you may have problems with reduced absorbency in your cloth nappies. In case you’re not sure, petroleum based nappy creams will contain ingredients like mineral oil, paraffin, petroleum, petrolatum, vaseline.

What can you do instead?

Cloth nappies don’t wick moisture away from baby’s bottom as easily as disposable nappies. And unfortunately, wet nappies next to baby’s skin means that your baby is more likely to end up getting nappy rash. Use a liner that wicks moisture away from baby’s skin, and your baby won’t get nappy rash as easily. That way you won’t need to apply nappy creams as often, and you won’t have issues with oil build up on your cloth nappies.

You can use a biodegradable disposable liner, like the ones from Pea Pods, Grovia or Nature’s Child. These will not only help get moisture away from baby’s bum, but they make pooey nappy cleanups a breeze. If the nappy is just wet, you can usually wash them and reuse them at least a couple of times.

Using a disposable liner also means that you can use whichever nappy cream you prefer if your baby has nappy rash that you’re trying to clear up. The liner puts a barrier between the cream and the nappy.

The other alternative is to use a simple zinc oxide and water based cream. Just mix it up into a paste, and apply it to the affected areas on your baby’s bottom. The zinc will soothe and heal the nappy rash, and you won’t get a buildup on your nappies as there’s no oil to trap the zinc in the fabric.

Nappy rash is not just caused by wet nappies, so if your baby seems to have recurring nappy rash, there are some other factors that you’ll want to check. Have a look at our Complete Beginner’s Guide to Nappy Rash for some ideas.

Here at Hello Charlie, we only sell natural nappy creams, so you’re not going to find petroleum based creams. (If you’re wondering why, check out our Safer Nappy Creams Cheat Sheet). But if you’re a cloth nappy user, and want to avoid the zinc based creams, too, here’s a list of which of our nappy creams contain zinc, and which ones don’t.

Which of our nappy creams contain zinc?

Which ones are zinc free?

Are you a cloth nappy user? Which nappy cream do you find works best with cloth nappies? Share in the comments below!

Get the latest posts straight to your inbox every week!