How to Get Rid of Mould at Your Place, The Natural Way

You may have heard about the health risks associated with mould – asthma, coughing, wheezing and nose and throat irritation at the very least. There have even been reports that certain types of mould cause cancer, lung disease, and respiratory infections, but these have not been proven. So should you be concerned? And how to get rid of mould at your place? 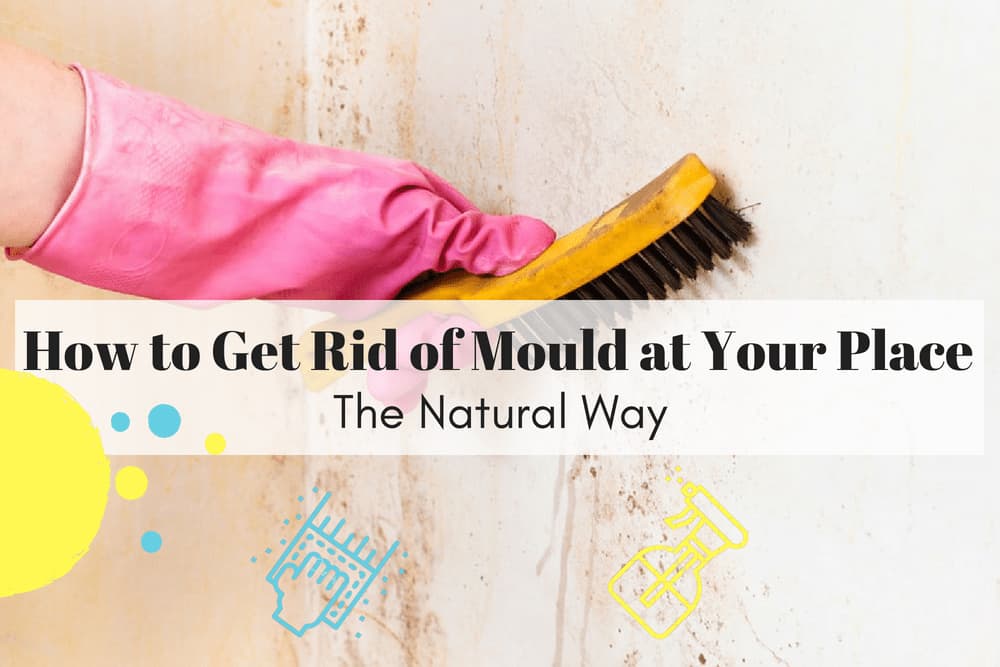 Mould’s dangers tend to strike at the weakest amongst us – children and the elderly. The good news is that most healthy adults don’t have much to worry about. However, those with asthma, allergies, compromised immune systems or chronic lung disease may get very sick indeed.

Even if you don’t have much to worry about health wise, mould is smelly, unsightly and destructive to your home.

What should you do about mould?

Your first impulse might be to reach for the bleach bottle, but cleaning mould naturally is actually more effective, as well as better for the environment. Bleach can kill mould on hard surfaces such as glass and tile, but it doesn’t work on wood and plaster. And forget about carpet and upholstery. Furthermore, bleach is corrosive and can be damaging to your skin, eyes and lungs.

How to get rid of mould naturally?

Cleaning mould naturally consists of a two pronged approach – preventing mould from forming and getting rid of the mould spores that are already there.

Here’s how to get rid of mould.

Use a HEPA filter vacuum

A vacuum cleaner with a HEPA (high efficiency particulate air) filter can work wonders when it comes up cleaning up your home, including getting rid of mould. I like my Dyson. It has a variety of tools that make it easy to clean under and behind furniture – all the dark corners where mould spores like to congregate. Best of all, the filtration system makes sure the dirt it sucks up stays in the vacuum and doesn’t get blown back out into your house.

Wash the mould away

The best way of cleaning mould naturally is to eliminate the dirt and grime that provide the nutrients for it to grow on. A simple wash will do just fine. You can use Dr Bronner’s liquid soap or dishwashing soap. Either will work. Make a solution of hot soapy water and wash the mouldy area down.

It’s a good idea to use a microfibre cloth that will trap the mould particles instead of just smearing them around. Rinse the cloth regularly in another bucket of water and you’ll soon get rid of all the gunk.

Use a pre-made mould solution

You can use a pre-made spray like the Abode Mould Control Spray or the Vrindavan Natural Mould Solution Surface Spray, both of which are natural anti-fungal and antiseptics that removes mould and kills the spores as well. They’re safe to use on hard surfaces, wood, carpet and clothing. Just spray, leave on for up to 24 hours in tough cases and wipe clean with a cloth.

Essential oils have natural anti-bacterial, anti-viral and anti-fungal properties that make them an excellent choice for cleaning mould naturally. Making your own anti-mould spray is easy. Just pour a few ounces of vodka (the cheaper the better) into a spray bottle, add your essential oils and then top up with water. You need the vodka to help disperse the oils – it won’t work properly otherwise. Shake vigorously before each use. Spray on, let sit and wipe off.

I like these essential oils for their antifungal action:

Prevent mould from occurring in the first place

Mould thrives in warm, humid environments. Keep it dry and mould won’t be able to get a foothold.

These strategies will work for everyday mould problems, but if your house gets flooded, or you have a plumbing leak or other damp issues, you need to get specialists involved. The professionals will know what to do to protect your family’s health.

What are your biggest mould challenges and what do you do to address them? Share below!