How to Raise Kids with Gender Equality in Mind?

I have two boys. Both of my sons do ballet. My youngest begged for six months to do ballet. He was three and has been doing it ever since. My eldest who started when he was 13. My boys are chalk and cheese. One of them is a football loving, adrenaline seeking, stereotypical boy (if there is such a thing). The other one is quiet and bookish has always loved dressing up in sparkly outfits and playing with makeup. 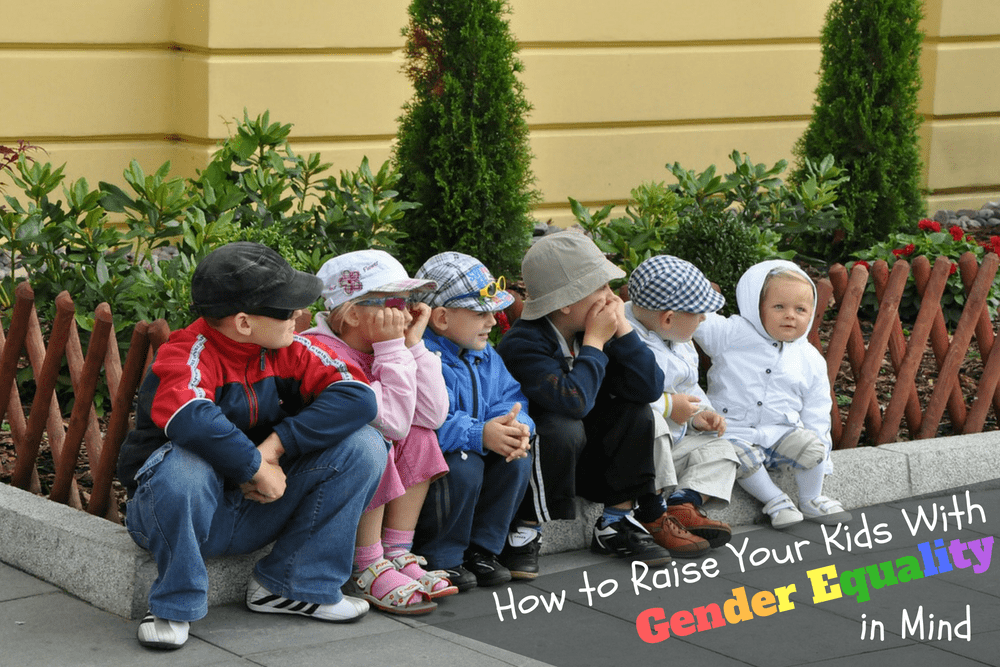 As they’re getting older, we’re having more and more discussions about how people are different. We talked about the marriage equality vote, and how it’s important that people love someone and are happy.

Recently, we’ve had a friend whose son brought home a boyfriend for the first time; and another friend whose child is identifying as gender neutral/non binary. One of my son’s friends wanted to know if I thought there were really over 500 genders.

Kids are thinking about these things and asking questions. So I think that it’s important that we think about it, and raise our kids in a way that’s accepting of gender differences.

What is gender anyway?

It would probably be a good idea at this point to talk a bit about what gender actually is.

Gender is the social construction placed upon your sex. It’s how your society tells you that you should act, feel and think based on your sex. You can easily see how gender roles have changed throughout history and from country to country. For instance, if you’ve ever read Homer’s Iliad, he talks about how Achilles, one of the greatest heroes of ancient Greece, wept and grieved over the death of his friend Patroclus. Nowadays, ‘boys don’t cry’.

What does it mean to be male or female?

More and more people are questioning what it means to be a boy or a girl, a man or a woman. Cisgender people feel like they pretty much fit in with their gender role as defined by their society. Some people are transgender, which means that they feel like the opposite sex from which they were born. Studies have shown that children as young as 5 years old think and act like the gender they identify as, not their biological sex.

“While future studies are always needed, our results support the notion that transgender children are not confused, delayed, showing gender-atypical responding, pretending, or oppositional — they instead show responses entirely typical and expected for children with their gender identity,” the researchers write.

Aside from cis and trans, people can be gender fluid, which means that they don’t want to let society define their behaviour. They may seem androgynous, or appear masculine one day and feminine the next.

Gender in the modern age is a spectrum, not strictly assigned into two rigid categories.

Sexuality, or who you’re attracted to, is completely different from gender. Someone might be a manly man, who wears leather, has big muscles and spends a lot to time working on his car, but be attracted to other men. Another man might be slim, dress in colourful, fashionable clothes and work as a hairdresser, but be attracted to women. He would still be heterosexual.

In Australia, men earn an average of 16.2% more than women in total. If they’re both working full time, a man will earn about $27,000 a year more than a woman, on average. There are a lot of reasons for that, but a large part of it is created by the gender expectation that a woman will do most the caretaking for children and elderly parents.

Quitting your job to stay home with the children can really damage your career, as can taking time off to care for them when they’re sick.

Some ideas for raising children to accept gender equality

Start talking to your kids when they’re little. Children become conscious of their gender identity around the age of 3 years old, so don’t be afraid that you’re bringing it up too early. Storybooks are a great way to open up the subject, and there are some wonderful, age appropriate books for little ones. Here’s a few that were recommended to me by my lovely local library:

Colin and Lee Carrot and Pea by Morag Hood

Lee is a pea. All of his friends are peas; except Colin. Colin isn’t a pea.

And so begins the deliciously funny story of two very different friends: a small green pea and a tall orange carrot stick. Colin the carrot can’t do everything the peas can, but he has some special carrot-y qualities that make him a very good friend to have.

The answer is: It doesn’t matter. Because worm loves worm.

Then Bailey meets a new friend who encourages him to become the person he feels inside, and together they begin to make dresses.

And Tango Makes Three: by Justin Richardson and Peter Parnell

Roy and Silo are just like the other penguin couples at the zoo – they bow to each other, walk together and swim together. But Roy and Silo are a little bit different – they’re both boys.

Then, one day, when Mr. Gramzay the zookeeper finds them trying to hatch a stone, he realises that it may be time for Roy and Silo to become parents for real.

A blue crayon mistakenly labeled as “red” suffers an identity crisis. Everyone tries to help him to be red, until a new friend helps him find the courage to be his inner self – blue!

Model the behaviour that you want your kids to see

Dad needs to be on board, too. When he’s helping around the house and doing his part to raise the kids, he’s teaching them how to be the kind of man that you want them to be. Boys and girls with highly involved fathers grow up to be happier and healthier, mentally and physically. They’re more likely to do well in school and later on in life, too.

Let your kids dress up and play with any and all sorts of toys. Don’t divide their chores up into ‘boy chores’ and ‘girl chores’. Get boys doing housework and girls doing yard work – they’ll thank you for it later.

Think about gender stereotypes when choosing toys, books and even clothes for kids. Ask them about their favourite colour, don’t just buy blue for boys and pink for girls – and be ready to answer comments about girls wearing boy’s clothes, or boys choosing to wear a skirt.

Use real names for body parts. Children need to know how their bodies work. And part of that is being clear about what things are called. Give honest, but age appropriate, answers to questions about sex and sexuality. Let your kids know that you’ll answer any of their questions about sex, no matter how uncomfortable you might feel about it.

They’ll probably bring their questions to you, but don’t wait to be asked. Don’t be afraid to bring up the topic – they’ll probably be much less embarrassed than you are.

Teach them about consent, too. Don’t force them to hug or kiss someone if they don’t want to – even if it’s a close family member. They have the right to stop the interaction whenever they start to feel uncomfortable or unsafe, no matter who it is. Teach them to respect other people when they say ‘no’ and ‘stop’. Learning about appropriate boundaries can start at a very young age.

Teach kids that all people are different, and you don’t need to have a label

Tomboy, princess – every single person in the world is different. You don’t need a label to identify or explain who you are. What’s important is that you can accept yourself for who you are, and be happy being you.

Find this helpful? You can checkout other parenting articles here at Hello Charlie.