Titanium Dioxide: Is It Safe? Or Should You Avoid It?

This is the next instalment in our ongoing series about chemicals often found in home and personal care products. Here, we make an assessment of ingredients so you can make informed choices about the products you buy.

You’ve probably come across titanium dioxide in sunscreen or in cosmetics. But did you know that this chemical is also in foods like doughnuts and in things like paint and rubber? Some studies suggest that titanium dioxide (TiO2) can cause cancer, while others say it’s perfectly safe. So is titanium dioxide safe? Let’s find out. 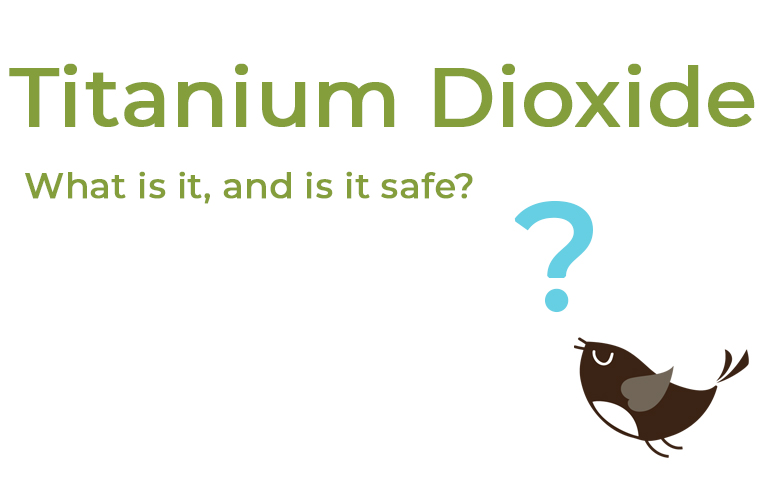 Titanium dioxide is the naturally occurring oxide of titanium. It’s a white powder that’s widely used as a whitening agent, UV filter, and thickener in many consumer products. Because it’s naturally bright and reflective, it’s added to paints, plastics, toothpastes, cosmetics and paper to give them a cleaner colour.

TiO2 is also a common food additive. Why is titanium dioxide in food, you may ask? It makes white foods like powdered sugar, salad dressing, lollies, chewing gum, biscuits, and dairy products even whiter.

Because it protects skin from both UVA and UVB radiation, titanium dioxide has been used in sunscreens for decades. And because it’s less irritating than UV absorbing chemicals like oxybenzone, it’s often the active ingredient in sunscreens for babies and those with sensitive skin.

What’s the problem with titanium dioxide?

The toxicity of titanium dioxide appears to be low. It has a low skin penetration, although it should be noted that inhalation is a concern. It’s one of the reasons I don’t usually recommend spray on products, like sunscreen, as it’s too easy to breathe it in.

Titanium dioxide may be safe to use on skin, but titanium dioxide nanoparticles are another matter entirely. Because they’re so tiny (smaller than 100 nanometers), there are concerns that these particles could penetrate the deeper layers of skin and end up in the bloodstream, posing potential health risks.

A recent study has shown that nano-titanium is carcinogenic to rats, and weakens their immune system. It’s unclear whether this study is applicable to humans, and the French government has ordered an enquiry into whether E171 is safe.

In cosmetics and sunscreen

Fortunately, studies indicate that most titanium dioxide nanoparticles are too big to sink past the uppermost layers of human skin. The problem with nano sized titanium dioxide seems to be when it’s inhaled or ingested.

There is evidence that titanium dioxide nanoparticles can be inhaled by some mammals, possibly even humans, and that ultra fine particles are more toxic than larger particles. Nano sized titanium dioxide can irritate the lining of the lungs and may cause enough injury to trigger a cancer-like response.

Sweets, lollies, and chewing gum have the highest levels of nano sized titanium dioxide, which means that children get the highest exposure levels to this chemical. Data also suggests that these ultra fine particles can cross the intestinal barrier and spread to other organs.

In 2017, a study by researchers at France’s National Institute of Agricultural Research found that absorption of nanoscale titanium dioxide can cause immune system disorders, intestinal inflammation, and cancer formation. Though the study was on rats, it showed that it only takes small amounts of TiO2 nanoparticles to induce colon cancer and other health problems.

This has led to concerns that the effect on humans may be similar. Since the study’s publication, many have asked for a ban on the use of titanium dioxide in food and medicine.

Some companies have already taken it upon themselves to ensure that their products don’t contain titanium dioxide. Back in 2015, Dunkin Donuts removed TiO2 from its powdered doughnuts and So Delicious took it out of their dairy free coffee creamers.

Is titanium dioxide bad for the environment?

Research has found that titanium dioxide nano particles are polluting beaches. However, it’s anticipated that a solution to this isn’t far away, as scientists have found a way to reduce the potential damage from titanium dioxide in sunscreen, while still retaining the sun protection factor.

What the experts say about titanium dioxide

Since 1966, the US Food and Drug Administration has listed titanium dioxide as a safe food additive, provided it doesn’t make up more than 1% of the food product. It also labeled titanium dioxide safe to use as a colour additive in drugs, medical devices, and cosmetics, including those for the eye area.

The FDA allows titanium dioxide in over the counter sunscreen drug products at concentrations no higher than 25%.

The International Agency for Research on Cancer classified titanium dioxide as a Group 2B carcinogen or “possibly carcinogenic to humans” in 2006. The finding was based on a couple of studies. One showed that animals that inhaled high concentrations of the chemical developed lung tumours. Another showed a “slightly increased” risk for lung cancer among titanium dioxide production workers.

In 2014, the EU’s Scientific Committee on Consumer Safety concluded that nano sized titanium dioxide is safe for use in cosmetics in concentrations up to 25%. This does not apply to titanium dioxide nanoparticles in products that might lead to inhalation exposure (like sprays and powders).

In Australia, the Therapeutic Goods Administration noted that the “vast majority” of studies show that titanium dioxide nanoparticles don’t penetrate skin or reach the bloodstream. In a 2017 report, the TGA said that based on current knowledge, “the minor risks potentially associated with NPs in sunscreens are vastly outweighed by the benefits that NP-containing sunscreens afford against skin damage and, importantly, skin cancer.”

Titanium dioxide has an Environmental Working Group hazard rating of 1-3. The EWG notes that the chemical “appears to have low skin penetration but inhalation is a concern.”

There’s still not enough evidence to say if titanium dioxide nanoparticles actually pose health risks to humans. What we do know is that (a) they’re in a lot of products, and that (b) we don’t have a clear idea as to how long term exposure affects us.

In cosmetics and sunscreen

While the effects of topical exposure is uncertain, what is known is that TiO2 nanoparticles can be inhaled and ingested. They can then accumulate in the lungs and in the gastrointestinal tract. From there, they can enter the bloodstream and reach other organs. Animal studies have found that nano sized titanium dioxide can lead to asthma, allergies, chronic inflammation, and lung tumours. It’s unclear if these findings translate to humans.

How to avoid titanium dioxide nanoparticles

So. Titanium dioxide? Seems fine. But titanium dioxide nanoparticles? It’s not quite as clear. Certainly you don’t want to be inhaling this.

It’s important to note that you shouldn’t skip sunscreen. Skin cancer can definitely kill, nanoparticles we’re not so sure about. And compared with UV absorbers, titanium dioxide is still one of the safest options for protecting yourself from the sun. If you’re worried about nanoparticles, skip the spray on sunscreens and stick to natural sunscreen creams and lotions.


As for cosmetics, keep in mind that companies don’t have to declare the size of the titanium dioxide they use. This means you’ll want to seek out brands that specifically state that they don’t use nanoparticles (like Benecos, Hanami, and Ere Perez). This is particularly important with products that become airborne, such as blush and face powder.

Nano sized titanium dioxide is in so many food products, it’s practically impossible to avoid. But if you stick with real, whole foods and avoid processed junk, you can significantly reduce the accumulation of titanium dioxide nanoparticles in your gut. 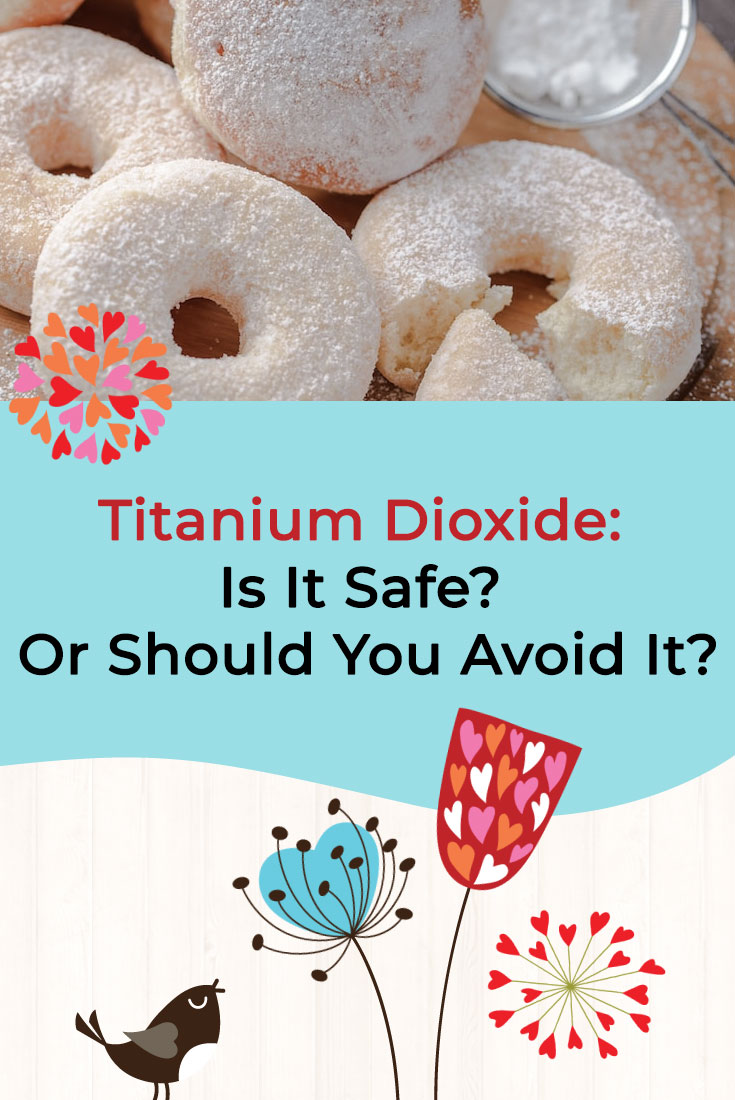