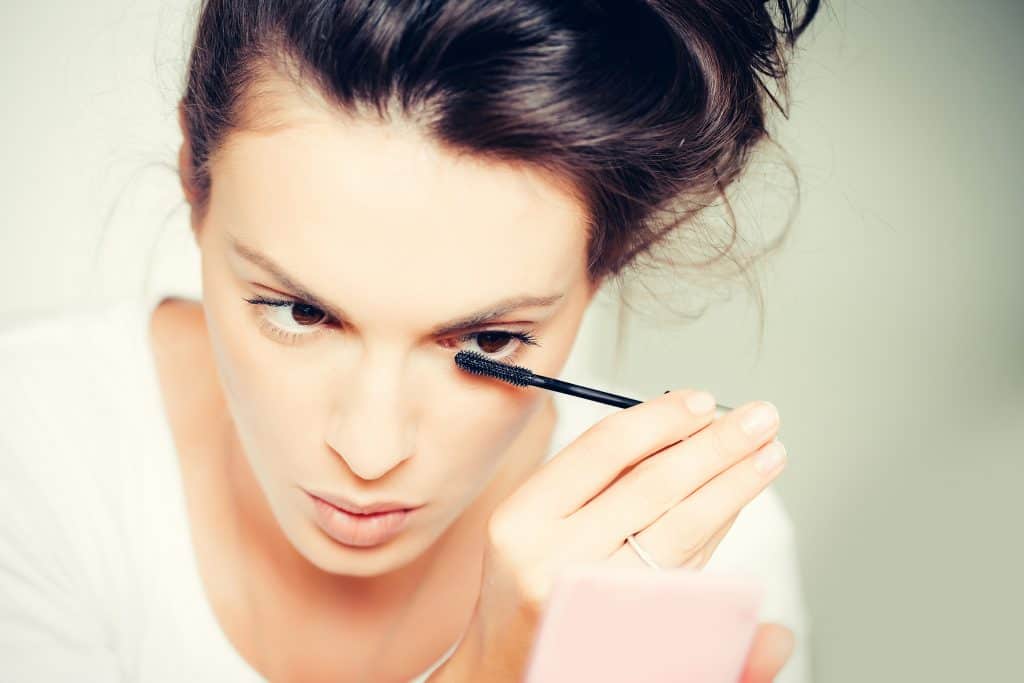 When the ancient Egyptians first began using mascara thousands of years ago, the mixture they used was made of lead ore, charcoal, crocodile dung, and honey. Today, mascara is made from much cleaner ingredients and is less likely to give you lead poisoning. And yet, some modern mainstream mascaras aren’t all that safe either.

First, let me just say: I love mascara. It’s one of my “can’t live without it” makeup items.  It helps me look more awake and like I’ve made an effort. Mascara has the uncanny ability of taking any woman’s look from drab to fab (or at least less zombie-like!) within seconds. It’s fantastic. But before you swipe on another coat of mascara, you might want to look into which nasties could be hiding in your favourite tube.

What’s the risk with mainstream mascara?

I wasn’t always so concerned about the possible toxins in mascara. I thought because it doesn’t actually touch your eyeballs or your skin, and because I put so little of it on my lashes, the ingredients didn’t matter so much as that of, say, my eyeshadow or moisturiser.

But, as I have since learned, there are many dangerous chemicals in mascara and they can end up on your skin, your eyes, and in the oil glands of your eyelids. They can be absorbed into your bloodstream or cause problems like plugged ducts or dry eyes. This is especially true if you sleep with their mascara on, frequently rub your eyes, or use mascara daily. And even if the amount of harmful chemicals in the product is minuscule, the long-term, everyday exposure to toxins may be enough to cause problems.

Some mascara ingredients are perfectly safe (water, oils, waxes), but many are irritants, allergens, hormone disruptors, carcinogens, and environmental toxins.

These are just a few of the nasty chemicals in mainstream mascaras:

Carbon black is a powder pigment that gives your eyelashes that full and dramatic look. Unfortunately, it’s also a possible carcinogen and is classified as potentially toxic to human organ systems. The U.S. Food & Drug Administration lists carbon black among colour additives that are no longer authorised in cosmetics, particularly in those that will be used in the eye area. Nonetheless, it is still an ingredient in many eye liners, mascaras, eye shadows, and eyebrow liners. Carbon black has an EWG score of 6. It also goes by the names acetylene black, thermal black, lamp black, furnace black, pigment black 6 or 7, and channel black.

Because the moist environment inside a tube of mascara is the perfect place for bacteria and mould to grow, some sort of preservative is needed to keep the product safe to use. In mainstream mascaras, this typically means parabens. Unfortunately, though parabens keep microorganisms from multiplying, these chemicals are also pretty bad for us humans.

Some parabens are known to disrupt hormone function, which has been linked to an increased risk of breast cancer, early puberty, and reproductive toxicity. Scientists have yet to find a causal relationship between parabens and breast cancer. However, because we’re exposed to these chemicals through so many different products on a daily basis, we could be overloading our bodies, which could lead to a wide range of health issues.

Butylated hydroxytoluene (BHT) and butylated hydroxyanisole (BHA) control the growth of microbes in mascara and other cosmetics. BHT, which EWG gave a score of 4, is classified as a respiratory irritant and is considered toxic or harmful to human organ systems. BHA, on the other hand, is rated 5-7. It’s an endocrine disruptor and a possible carcinogen.

The International Agency for Research on Carcinogens (IARC) and the U.S. National Toxicology Program have both classified formaldehyde as a known carcinogen. The chemical, which EWG has given a whopping hazard rating of 10, is also an allergen and a skin toxicant. Despite the obvious risks, formaldehyde releasing cosmetic preservatives like DMDM hydantoin (7), quaternium-15 (8), and diazolidinyl urea (6) are still found in things like facial cleansers, moisturisers, toners, foundation, blush, eye liners, and — you guessed it — mascaras!

Retinyl acetate is a synthetic vitamin A ingredient that lends its moisturising benefits to some mascaras. Unfortunately, it’s a human reproductive toxicant and is possibly carcinogenic. On the EWG hazard scale, it has a score of 9, which tells you that this one is really best avoided.

Phthalates have been linked to cancer, endocrine disruption, and developmental and reproductive toxicity. The European Union has banned the use of these chemicals in cosmetics, but they are still common in products from the U.S.

Aside from the word “phthalate,” look for “DEP,” “DBP,” and “DEHP” in labels. Be suspicious of products that list “fragrance” or “parfum” as an ingredient. Cosmetics companies don’t have to provide a list of the individual ingredients in the fragrances they use; therefore, consumers won’t be able to tell by the label alone if there are phthalates hiding under that umbrella.

Some pigments are safe for use in cosmetics, but many, like carbon black, pose a wide range of health hazards. Aluminium powder, a metallic substance made of finely milled aluminium, is another colourant that’s bad news. Aluminium powder is a neurotoxin and can damage the immune and respiratory systems. EWG has given it a score of 4-9.

Make sure your mascara doesn’t contain heavy metals by looking for the specific colour index number of the colourants (such as CI 77491 for iron oxide or CI 77019 for mica).

What’s the alternative to toxic mascara?

While there’s a good chance that your current mascara contains harmful chemicals, you don’t necessarily have to ditch mascara altogether and compromise your beauty routine.

Not all mascaras are bad. Lucky for us, there are now heaps of green mascaras that really work and don’t contain a bunch of toxic ingredients. Natural mascaras are safer and are no harder to find than regular mascaras. Most of them even offer ingredients (like coconut oil, aloe vera, and sunflower seed oil) that help nourish your lashes. With all the lovely nontoxic mascaras out there, there’s just no good reason to still purchase mainstream mascara.

We recommend (and use!) these top natural mascaras:

And one last thing! Aside from the products you use, it’s also how you use them that’s important. With mascara, it’s best to stop after two coats, as more layers can clog the oil glands along your eyelids. Always store your mascara in a cool place — never in the car — as heat will degrade the product. Replace your mascara every three months. And never share or swap mascaras.

Trying to figure out which mascaras are okay and which ones are bad? Look out for our upcoming Safer Mascaras Cheat Sheet.

Have you made the switch from mainstream to natural mascara? Share your favourite brands in the comments below.