Isn’t it ironic that something created to protect us from life threatening illnesses may actually harm us?

You should use it every day. And you should put it on thick enough that it actually protects us from the sun. Then you should reapply often. Unlike soap or shampoo that’s quickly washed off, sunscreen stays on our skin for hours.

You’d think that because of this, sunscreen ingredients would be safe and non toxic.

But as we now know, conventional sunscreens can be full of harmful ingredients.

Studies indicate that ingredients found in popular sunscreens can:

If you’re shopping for your next sunscreen, watch out for these ingredients. 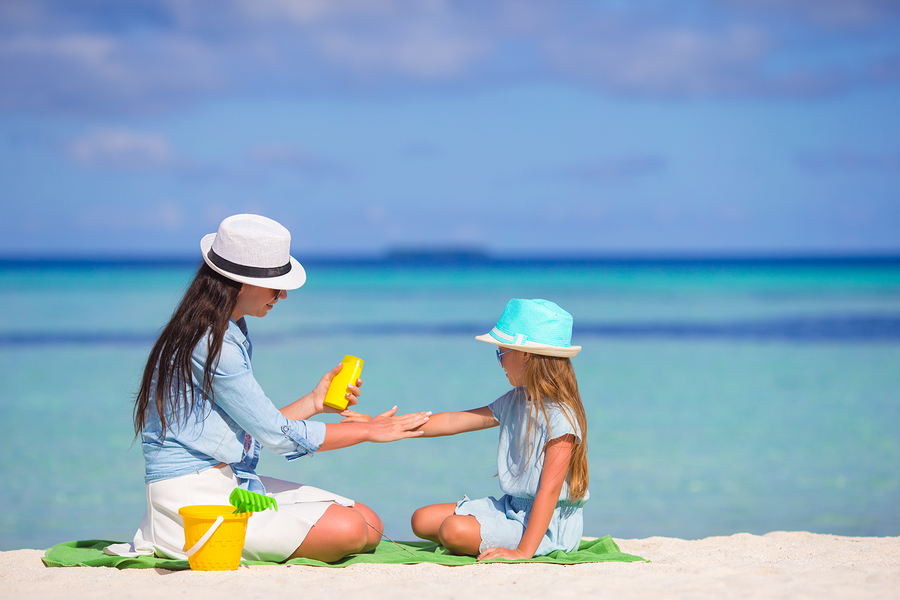 Also called benzophenone-3 or BP-3, oxybenzone is in nearly 65% of all chemical sunscreens in the Environmental Working Group’s 2017 sunscreen database. It has been detected in over 96% of the American population.

Of all the popular sunscreen chemicals it warns us about, EWG calls oxybenzone “the most worrisome.” The main concerns about oxybenzone are:

Oxybenzone penetrates the skin and enters the bloodstream. Studies have shown that it mimics oestrogen and blocks testosterone, especially in adolescent boys. In women, it is associated with endometriosis.

Oxybenzone has an EWG hazard score of 8.

On the other hand, the American Academy of Dermatology says that the ingredient is safe and that no data conclusively shows that it poses significant health problems.

Like oxybenzone, octinoxate is a very common sunscreen ingredient. It stays in the body and is detectable in human breastmilk. The main concerns with this chemical are:

While we use sunscreen to protect our skin from sun damage, studies have found that octinoxate may actually do the reverse. Research has found that the chemical produces free radicals that can damage skin cells and induce premature skin ageing.

Another one that mimics hormonal activity, this one disrupts oestrogen, progesterone, and androgen. There’s also concern that it releases toxic by-products as it breaks down.

Octisalate blocks UVB rays but not UVA, which is why it often comes paired with other active sunscreen ingredients like avobenzone.

The problem with octisalate is that it’s a “penetration enhancer.” This means that it increases the amount of chemicals that passes into the skin. This becomes problematic when octisalate is accompanied by harmful ingredients (like hormone mimickers or synthetic fragrances).

Like octinoxate, this one is a photosensitiser. On sun-exposed skin, it produces free radicals that speed up skin ageing and increase the risk of skin cancer.

The EWG notes that this active ingredient poses a risk of skin allergies. In 2010, researchers advised caution when using octocrylene-laden sunscreen on children.

Also known as sulisobenzone, this benzophenone derivative may cause contact dermatitis. Studies have shown that benzophenone bioaccumulates and persists in the environment. The chemical and its derivatives are associated with cancer and endocrine disruption.

Unlike benzophenone-4, benzophenone-8 or dioxybenzone isn’t approved as a UV filter in the European Union. The main concerns for benzophenone derivatives are:

Meradimate, as it sometimes appears on labels, is in some sunscreens in the US but not in Japan or in the EU. The big problem with this chemical is that it forms damaging free radicals when exposed to sunlight.

PABA or para-aminobenzoic acid may cause hypersensitivity and allergic reactions. It may also encourage the formation of cancer cells in the skin. Studies show that PABA breaks down and releases free radicals when exposed to sunlight. Canada and the EU have both banned PABA in cosmetics.

Padimate O, a derivative of PABA, is another baddie. This one has an EWG hazard score of 5. Main concerns include:

This UVB absorber may cause photocontact dermatitis. It’s also a penetration enhancer, sinking deep into and persisting within muscle tissue.

Instead of sunscreens with these active ingredients, look for ones with the physical UV blockers zinc oxide and titanium oxide. If you prefer chemical UV filters, go for avobenzone or Mexoryl SX, which the EWG considers safer options.

Inactive sunscreen ingredients typically make up 50% to 70% of the product. The following range from potentially toxic to verifiably harmful:

US, the EU, Canada, and Australia banned the use of some phthalates. Studies have linked these chemicals to practically every major health concern, from cancer and obesity to early puberty and ADHD.

Parabens may affect our hormones and reproductive systems. They may also induce allergic reactions and contribute to DNA damage and skin ageing.

PEGs or polyethylene glycols may be contaminated with carcinogenic chemicals. They’re also penetration enhancers and have been associated with skin irritation and hypersensitivity reactions.

Manufacturers don’t have to disclose the specific ingredients they use in their fragrance blends. This means that synthetic fragrances may contain numerous toxic ingredients and none of us would have a clue.

Many synthetic colours are derived from coal tar. Studies have found some of them to be allergy inducing, toxic to the brain and other organs, and possibly carcinogenic.

The EU has concluded that no amount of methylisothiazolinone has been demonstrated to be safe for use in leave-on cosmetic products, including baby wipes. In 2013, it was named “Allergen of the Year” by the American Contact Dermatitis Society.

To help fight signs of ageing, manufacturers often add retinyl palmitate to sunscreens. However, EWG has warned consumers about this chemical. Government studies in the US have shown that if you apply retinyl palmitate to animal skin and then expose the skin to sunlight, the chemical may speed the development of malignant tumors and lesions.

What can you do?

Most of the studies on sunscreen ingredients were done on animals, which makes it hard to determine if the same effects will be observed in humans.

Nonetheless, some scientists warn that these ingredients could be so toxic that they may cancel out the health benefits of using sun protection.

But this doesn’t mean that you should stop using sunscreen! Wearing sunscreen is still one of the best ways to protect ourselves from skin cancer, skin ageing, and the many other consequences of getting too much sun.

Avoid the sunscreen ingredients listed above. Don’t buy spray on sunscreens—you risk inhaling toxic chemicals (and getting them into the lungs of the people around you). Avoid sunscreens with SPFs over 50—these fool you into thinking that you can go longer between reapplications.

Above all, use sunscreen properly. For your body, squeeze out at least enough sunscreen to fill a shot glass. Apply it 30 minutes before you head out and reapply every 2 hours or after swimming. Plan your activities around the sun, protect your eyes with sunglasses, and stay in the shade when you can.

Gearing up for sunnier days ahead? Check out Hello Charlie’s selection of natural sunscreens—no nasties here. If you need help choosing the right product for your family, here’s our Safer Sunscreens Cheat Sheet to get you started. 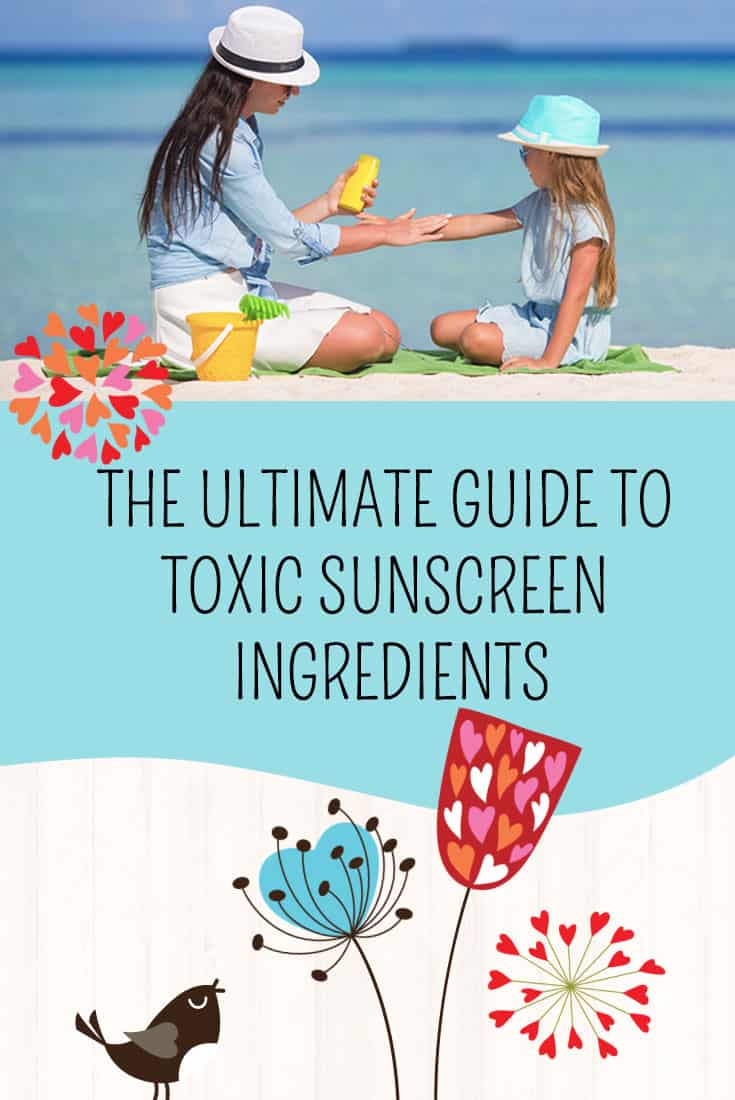