What Is Phenoxyethanol? (And Why Should You Avoid It?) 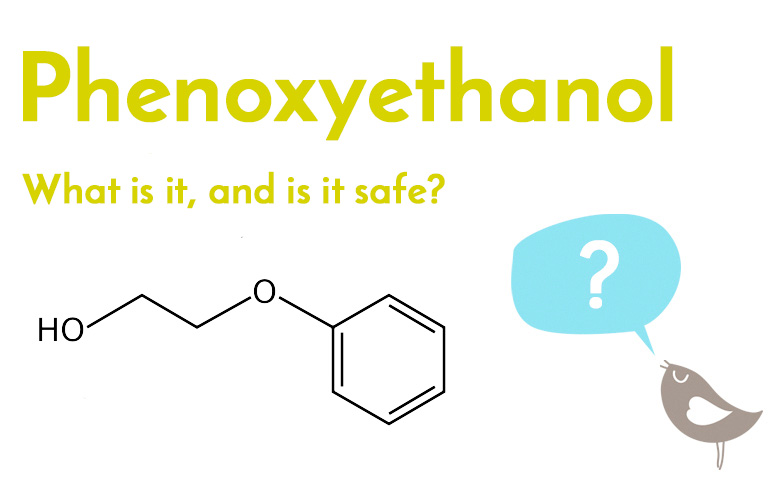 This is the next instalment in our ongoing series about chemicals often found in home and personal care products. Here, we make an assessment of ingredients so you can make informed choices about the products you buy.

Phenoxyethanol is a very common preservative that became even more popular after parabens fell from grace in the last decade.

Parabens used to be the go-to preservative for cosmetics. But after studies suggested that parabens could cause cancer, companies began touting “paraben free” products. They tried to lump these new versions in with the natural and organic items on store shelves.

Regardless of how these products are marketed, “paraben free” doesn’t always mean cleaner or healthier.

Companies still need an effective and cheap preservative to keep their products shelf stable. Unfortunately, many of them have replaced parabens with something that may be just as bad: phenoxyethanol.

Phenoxyethanol is an oily, colourless, slightly viscous liquid with a faint floral scent.

It’s a natural component of chicory and green tea. However, the phenoxyethanol in most cosmetics is synthetically produced in a laboratory rather than plant derived.

Synthetic phenoxyethanol is made by reacting phenol, a mildly acidic petroleum derived chemical, with ethylene oxide, a proven human carcinogen, in an alkaline medium.

Phenoxyethanol keeps your makeup and skincare products fresh and germ free so you don’t have to keep them in their own mini fridge or toss them out after a month.

It’s in a wide variety of cosmetics and personal care products. You’ll find it in:

Like parabens, phenoxyethanol is valuable because it offers broad spectrum protection against microorganisms. But unlike parabens, it has yet to earn a bad reputation, which is why companies can still claim that it’s a “less toxic” alternative.

In addition, phenoxyethanol is one of the few preservatives that doesn’t release formaldehyde.

But is it really better than parabens or formaldehyde releasing preservatives?

What’s the problem with phenoxyethanol?

While product marketers like to claim that phenoxyethanol is a safe and gentle preservative, scientific research doesn’t always agree.

Phenoxyethanol has been linked to:

In 2008, the US Food & Drug Administration issued a consumer warning about a brand of nipple cream called Mommy’s Bliss. The FDA found that it contained ingredients that could cause “respiratory distress or vomiting and diarrhoea in infants.”

One of the ingredients was phenoxyethanol.

According to the FDA, phenoxyethanol “can depress the central nervous system.”

In 1990, a report published in the Journal of Occupational Medicine told of three women who suffered from headache, grogginess, slurred speech, and diminished sensation and strength of hands and fingers. They had been exposed to 2-phenoxyethanol in their workplace. Later on, these women also experienced cognitive impairment and had major difficulties at work.

In 1999, German researchers concluded that phenoxyethanol may have neurotoxin potential.

Phenoxyethanol has been linked to:

Also, it may disrupt the skin’s microbiome, eliminating the healthy bacteria that serve as our first line of defence from pathogens.

Studies on lab animals have shown that the preservative may be a reproductive toxin and that its effects may extend to future generations.

Because of the way it is produced, there’s a possibility that phenoxyethanol could contain ethylene oxide—a highly toxic gas. Ethylene oxide is a Group I carcinogen. It can also disrupt normal human development and damage the central nervous system.

What the experts say about phenoxyethanol

The FDA allows the use of phenoxyethanol as an indirect food additive and as an ingredient in cosmetics and drugs.

Back in 1990, the Cosmetic Ingredient Review Expert Panel concluded that the chemical was safe as an ingredient in cosmetics “in the present practices of use and concentrations.” It reaffirmed this decision in 2007.

In Japan and in the European Union, the concentration of phenoxyethanol in cosmetics is limited to 1%.

In September 2012, the French Agency for the Safety of Health Products (ANSM) raised concerns about phenoxyethanol.

The agency said that the EU should lower the maximum authorised concentration to 0.4% in products intended for children three years old and younger. It also suggested a ban against phenoxyethanol in products for infants’ nappy areas.

In 2016, the EU’s Scientific Committee on Consumer Safety concluded that phenoxyethanol is safe in concentrations up to 1%, including for infants.

Since they became part of COSMOS, both the Soil Association and ECOCERT have disallowed the use of phenoxyethanol in products they label organic.

Phenoxyethanol has a hazard score of 4 on the Environmental Working Group’s Cosmetics Database.

How to avoid phenoxyethanol

Companies and scientists say that the amount of phenoxyethanol in cosmetics is too tiny to be of concern.

But where is the research into the long term cumulative effect of using multiple phenoxyethanol containing products day after day, year after year?

And what do we know about how phenoxyethanol interacts with the other chemicals we put on our bodies on a daily basis?

Until we know more about the long term health effects of phenoxyethanol, we can perhaps err on the side of caution and avoid this preservative when we can.

If you want to avoid phenoxyethanol, here’s what you can do.

First, you have to be a smart shopper. Always read ingredient lists and look for these other names for phenoxyethanol:

So if you see phenoxyethanol on a label and it’s high up on the ingredient list, put the product back on the shelf. That could mean that there’s more than 1% phenoxyethanol in it.

Finally, remember that you don’t have to choose between the lesser of two evils (parabens OR phenoxyethanol). Not all preservatives are nasty. Every year, chemists are discovering natural preservatives that extend the shelf life of cosmetics but are safer than synthetic ones.