What to Look for in Disposable Nappies?

There are nearly 1,000 patents registered that relate to nappy design. A maxi (size 4) nappy holds up to 400 ml of water, yet your baby stays dry. Ever wondered how that happens?

What parts does regular disposable nappies have?

What to look out for in disposable nappies?

First, what you really want is a nappy manufacturer who will disclose all of their ingredients. And look for the ‘free from’ claims. If a manufacturer doesn’t mention that their nappy is free from something, or won’t tell you, you can assume that it’s in there.

Often made with polypropylene or polyethylene (both of which are considered to be safe plastics), to hold the absorbent centre in. Some manufacturers infuse this layer with a moisturising lotion. As we know, moisturising lotions can contain all sorts of chemicals, including phthalates and petroleum based products.

It’s important to know what’s in the inner lining of a nappy, as this is the part that sits right next to your baby’s skin.

The bulk of a disposable nappy is the absorbent centre. This is usually made of wood pulp and super absorbers.

Super absorbers were first used in disposable nappies in the early eighties, and the first ones used were sodium polyacrylates or SAPs. SAPs can absorb up to 30 times their weight in liquid, which means that nappies need a lot less of the bulky wood pulp, and are much more effective at containing leaks.

The fact that nappies absorb a lot of moisture also means that babies are a lot less likely to get nappy rash. Some of the eco nappies are now using some super absorbers made from biodegradable materials, such as wheat or corn. The natural super absorbers are not yet as effective as the SAPs, which is why there’s still a mixture being used even in the most eco of disposable nappies.

Do you need SAPs in your disposable nappies?

You want SAPs in a nappy, so that it’s not as bulky. That means that it’s more comfortable for your baby to wear, it’s not as bulky and heavy to ship, so there are less emissions. And when you come to dispose of it, a thinner nappy doesn’t take up as much space in landfill. However, some manufacturers use SAPs that contain phthalates, and that’s not good.

The wood pulp is often bleached, and often use chlorine based bleach, and this can leave behind dioxins.

And of course it’s important that the wood pulp used is from FSC certified sources, so that it’s sustainable.

Meanwhile, some nappy manufacturers put a fragrance in between the absorbent core and the outer layer. Fragrances can contain different toxic chemicals, which is why many people have allergic reactions to fragrances and perfumes.

The outer layer is often made of polyethylene or polypropylene film, and prevents the nappies from leaking. This layer can contain phthalates, chlorine and can also be manufactured using organic solvents. Bambo Nature specifically says that their nappies doesn’t contain any of these.

Some nappy brands are using a biofilm for the outer layer. But it’s important to note that there’s no nappy that’s completely biodegradable. The technology is just not advanced enough yet, so be aware that any company claiming complete biodegradability. Most likely, it’s misleading.

All those cute little cartoon characters on nappies are printed with ink. These can be skin sensitizers such as Disperse Blue 106, Disperse Yellow 3, Blue 106, Orange 37/76, Brown 1. Inks can also contain heavy metal pigments.

Some brands use dyes, and these can also be irritating to the skin.

The sticky tabs fasten the nappy around baby, and the elastics around the legs to help prevent leaks. Glues are used to stick all these things together.

Do you find this article helpful, you might also want to read ‘Nappy 101 – A Guide to Cloth, Hybrid, and Disposable Nappies’. 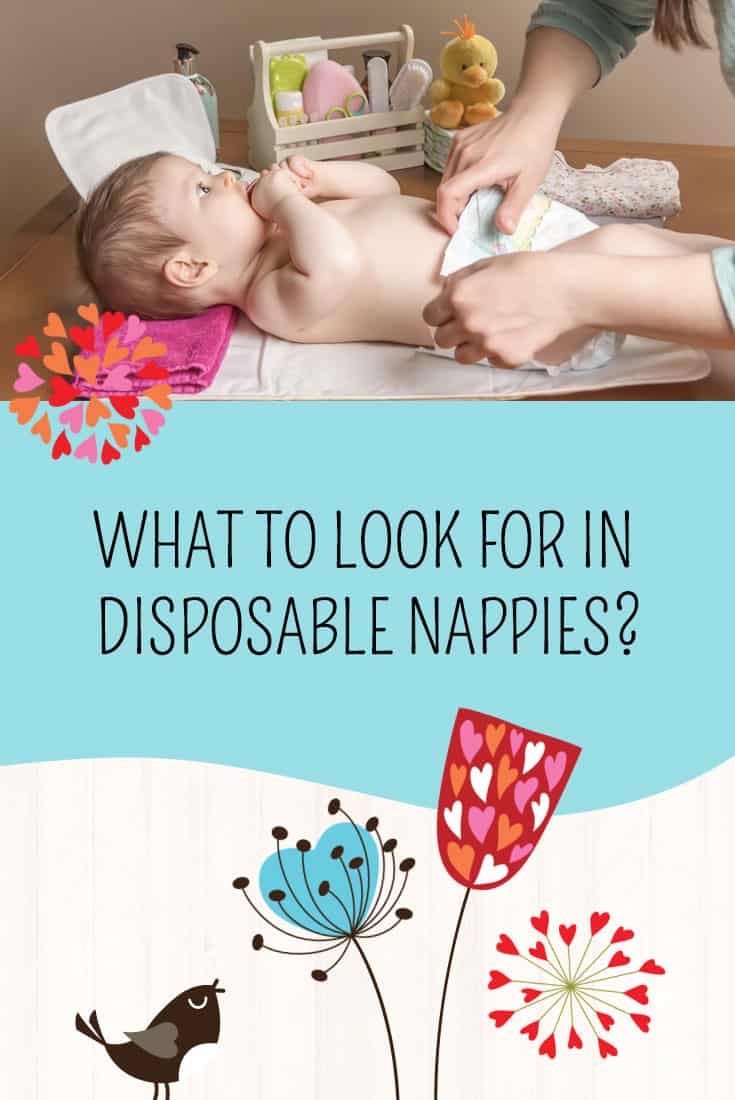